The password reset function of AWS Cognito allows attackers to change the account password if a six-digit number (reset code) sent out by E-mail is correctly entered. By using concurrent HTTP request techniques, it was shown that an attacker can do more guesses on this number than mentioned in the AWS documentation (1587 instead of 20). If the attack succeeds and the attacked accounts do not have multi-factor authentication enabled, a full take-over of the attacked AWS Cognito user accounts would have been possible. The issue was fixed by AWS on 2021-04-20.

An attacker who guessed the correct reset code can set a new password for the attacked AWS Cognito account. This allows attackers to take over the account that is not using additional multi-factor authentication.

AWS Cognito is an AWS Service that provides user account management. This includes a password reset functionality as a self-service for Cognito end-users.

The attack described here assumes that the AWS Cognito service is directly exposed to the web without custom filtering in the program code of the AWS customer. This is likely to be a common configuration. In the setup that was tested, an AWS Lambda instance forwarded requests to the AWS Cognito service by using the Python Chalice library.

If no attack happens, the user's workflow is as following:

As the code is the only secret value, it is crucial that an attacker can not guess its value. The codes have six digits, therefore the key space is 1'000'000, which corresponds to around 20 bits of security. As this is not sufficient from a generic security perspective because an attacker could potentially brute-force the code, AWS has to limit the number of times it can be entered.

After the three-step process is done, the server will respond with one of the following responses:

An attacker would like to trigger the code mismatch as many times as possible until the password is changed, without triggering the limit exceeded response. The AWS documentation about password resets of AWS Cognito accounts states:

In a given hour, we allow between 5 and 20 attempts for a user to request or enter a password reset code as part of forgot-password and confirm-forgot-password actions. The exact value depends on the risk parameters associated with the requests. Please note that this behaviour is subject to change.

There is no more information from AWS about how exactly the rate limiting is implemented. During our testing the behaviour of this rate limiting was non-deterministic in two ways:

We were able to show that, using a concurrency technique that sends requests simultaneously, it was possible to try up to 1587 codes before being blocked with a limit exceeded message for the first time. 1587 attempts corresponds to a 0.16 % chance to guess the correct code in one attack. As the attacks conducted allowed anywhere between 20 and 1587 guesses, it is unclear how successful an attacker would be if multiple user accounts would be attacked simultaneously.

The approach we used is based on opening several hundred TCP connections simultaneously, send all bytes except the last byte in each of the HTTP requests and then try to simultaneously send the last byte of the requests at once. This technique was developed by James Kettle of PortSwigger and is described in the corresponding blog post "Embracing the billion-request attack". The attack was conducted by using the Turbo Intruder tool created by James Kettle. More specifically, the race.py script of Turbo Intruder was used.

The Turbo Intruder setup is shown in the following picture: 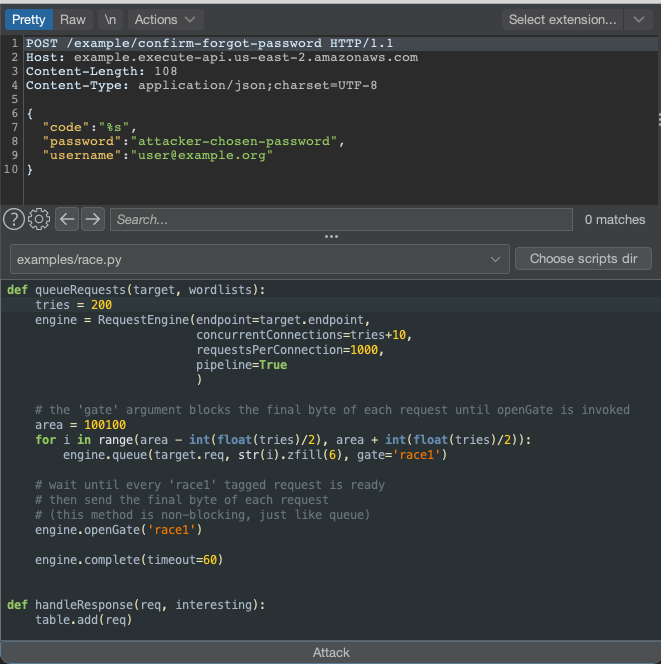 For demonstration purposes, in some of the guesses sent during the attacks, the known correct code was sent which returned an HTTP 200 response, changing the password of the attacked account immediately, which proofed that the attack did work.

The likelihood that an attack succeeds depends on how the undeterministic parts of AWS Cognito would behave during the attack, but we assume successful attacks would have been possible. First, a single attack with a 0.16 % chance means that every 625th attack would succeed. Second, the attack could be repeated at least once for the same code after the cool-down, meaning every 312th attack could succeed. Moreover, the entire attack could be repeated and additionally applied to different AWS Cognito user accounts in parallel to increase the likelihood to succeed at all.

As the issues is fixed, it is not reproducible any more. But for future reference we include the steps here:

This issue was found by Tobias Ospelt of Pentagrid AG. Pentagrid AG would also like to thank the AWS Security team for the collaboration on this issue.